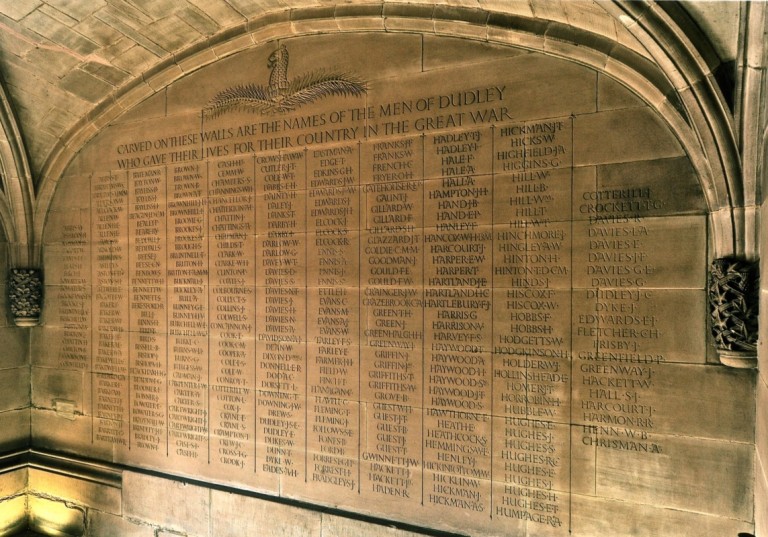 How to find Dudley Clock Tower

Dudley’s War Memorial is impressive in almost every way. In 1918 the town was a County Borough with a 1911 population of 51,079 and second to none in pride and reputation in the Black Country. Although it took many years to complete, the War Memorial was incorporated in the clock tower of the new Town Hall of 1928 and commemorates no fewer than 720 names. It was unveiled by Stanley Baldwin, the Prime Minister, at the same time as he opened the Town Hall buildings. The architect was Harvey and Wicks and the sculptor was William Bloye. On the main façade and above the first floor window appears a sculpture of St. George and the Dragon. At the base is a vaulted chamber, entered from the street, and over its entrance is the unusual and thought provoking inscription:

IF YOU THINK, HAVE A KINDLY THOUGHT,
IF YOU SPEAK, SPEAK GENEROUSLY,
OF THOSE WHO AS HEROES FOUGHT

The Mayor sent a version of these lines to Thomas Hardy for his comments and this was the outcome.

Four bronze lion heads were added in 1936 to support flag-poles beside the entrance. Inside the chamber the corbels depict the rose, thistle, shamrock and daffodil. The names of the Dudley men are commemorated on two walls of the chamber and the lettering is beautifully inscribed in stone. There are two alphabetical sequences, indicating that some names were added at a later stage. The central panels of the two walls are in alphabetical order without rank or regiment. A second set of names, in two columns and mostly in alphabetical order, is recorded at the side of the main panels. A book with illuminated names, units and addresses has been on display in the foyer of the Council House for many years and this contains the majority of the names with details of rank and address.

There are 720 names but, what with errors, these represent 717 men. Most of the names also appear on Dudley’s Ward Memorials, erected beside the churches at Kates Hill, Netherton and Woodside. Many churches, schools and clubs also had memorials, including St. James, Dudley Grammar School and Bishop Claughton School. The Clock Tower Memorial chamber (lobby) proved to be too small for well-attended events and a Cenotaph was built in nearby Priory Gardens in 2000. This has made the annual Remembrance celebration easier but has removed the personal significance of the names of those who died.

Dudley Clock Tower is one of 87 memorials listed within our site. You can search for other memorials by entering your Town, Street or Post Code into the search box below: